After we immigrated to America in 1970, my mom told me, “In India, you can get discriminated seven different ways but in America, three. But, if you work hard and persevere, you can overcome even those three in America.”

My mom’s wisdom has always guided my efforts. Growing up in the public school system in New Jersey, as one, if not the only dark-skinned kid among 4,000 other kids, of course, I experienced discrimination. But, I worked hard and persevered, was number one in my class, earned a place on the varsity soccer team, was accepted to M.I.T. where I earned four degrees, and went on to win all sorts of awards locally, nationally and internationally.

For me, racism is not those who use colorful words when referring to the color of my skin. That is just ignorance.

I have experienced the racism of the two-party Establishment right here in Massachusetts. The Democrat Party Establishment with its vanguard of the Southern Poverty Law Center and publications like The Nation have branded me as a “White Supremacist,” “Nazi” and “Racist” because I do not fit their mold and am not a Democrat, the expectation of anyone who is dark-skinned. The Republican Party Establishment, including Fake Trumpers and Never Trumpers, is still so insular that it can’t accept a dark-skinned, independent-minded, accomplished M.I.T. PhD, who started seven successful companies in Massachusetts.

The fact is, I am a TRUE “Democrat” and a TRUE “Republican” in the vein of people like Jefferson and Lincoln. My candidacy for U.S. Senate is about America and bringing people together, Black and White, and addressing issues that transcend political parties: Issues such as Clean Government, Real Health and Real Jobs. We need term limits to ensure Clean Government. We need a clean, non-pesticide-ridden public food supply to ensure Real Health. We need more vocational training schools so that our children can learn real skills to get Real Jobs.

My candidacy offers an opportunity for you to have someone who is independent of both political parties, someone who has a track record of fighting, and winning and standing up on his own two feet. THAT is the spirit of America. That is why my parents and I came to America, and that is what I have to offer you. I am the only candidate who is committed and can defeat the Fake Indian and racist Elizabeth Warren. 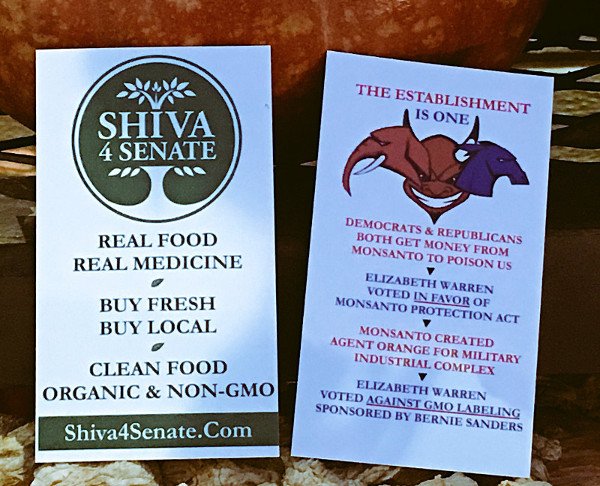