Marlborough, MA – In a major shakeup to the U.S. Senate race in Massachusetts, Dr. Shiva Ayyadurai announced at a crowded press conference that he is dumping the MA GOP Establishment and going Independent for their betrayal of Republican voters and the people of Massachusetts. 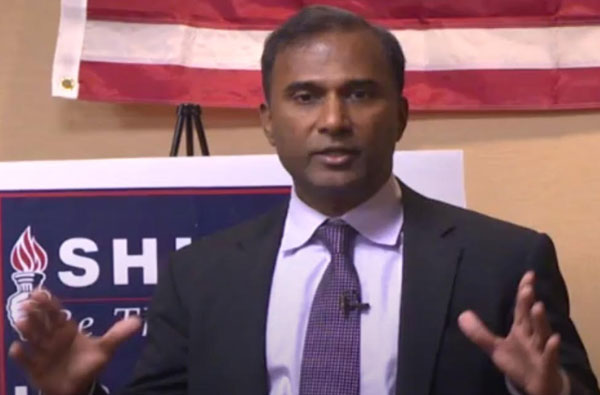 Dr. Ayyadurai launched his announcement stating, “Today, we the people, declare our independence from the sewer of Massachusetts career politicians and their cronies that feed the swamp in Washington, DC,” which drew a standing ovation from a screaming room of supporters chanting “Shiva! Shiva! Shiva!” wearing T-Shirts emblazoned with “Declare Your Independence. The Establishment Is One. The Republicans and Democrats Profit from War and Sickness.” 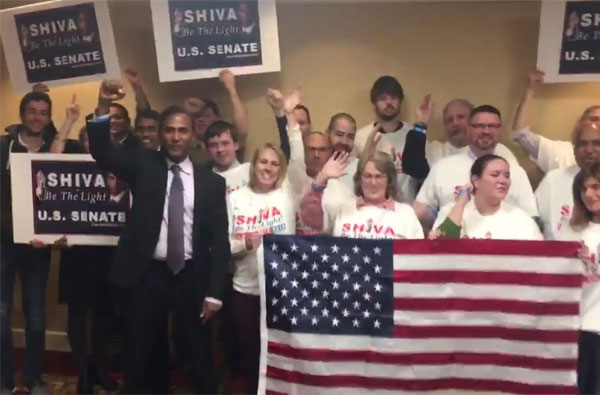 Boston Magazine reporter Spencer Buell made a point of highlighting the graphic image on the T-Shirt, “A cartoon demon whose horns have been replaced with both an elephant and a donkey.” Responding to a question from Boston Globe reporter Laura Crimaldi, Dr. Ayyadurai stated, “We dumped the Republican Party in Massachusetts. We declared our independence.” He clarified to Mr. Buell that, “The way I look it, the world is Establishment versus Change Agents. The Establishment is people who want to keep things the way they are and change agents are people like me.“

Dr. Ayyadurai asked the thousands at the venue, “What have the career politicians delivered the people of Massachusetts? The country’s worst highways, roads and subways. The state with highest in opioid addiction rates – three times the national average. And, to top it off, these politicians are rated the worst in public integrity, meaning they are the best at corruption. It’s time for you to leave your parties and become independent. They do not deserve you!”

Given the occasion of Veterans Day, Dr. Ayyadurai began his talk with a moment of silence to honor America’s veterans. Frank Licata and Ronald Megna, two blue collar workers, preceded the talk. Mr. Licata, an electrician, who had worked on President Donald Trump’s campaign said, “The two parties serve nobody but themselves. Their latest tactic is to use Fake Trumpers to manipulate blue collar workers, like me, to bring back voters to the MA GOP.” Mr. Megna, a man of multiple vocations: electrician, nurse and vocational technical school teacher, shared why America needs real and authentic people like Dr. Ayyadurai serving in Washington.

Michelle Jeffalone, an author and artist, from a family of veterans dating back to World War I, was teary-eyed when she spoke about how Agent Orange killed her uncle who had served in Vietnam. She said, “Dr. Ayyadurai is the only one courageous enough take on Monsanto.”

Earlier in the morning, Dr. Ayyadurai delivered a lecture, “Dangers of GMOs” in which he spoke about about the lack of safety standards for genetically engineered foods (GMOs) and criticized big Agro-Biotech companies such as Monsanto for destroying the public food supply, the real source of poor health. “Both Democrats and Republicans are on the payroll of Monsanto,” he said, while pointing out that Bernie Sanders had received payoffs from the firm. He criticized Elizabeth Warren for opposing the clear labeling of GMO foods and pointed out that she had voted for the “Monsanto Protection Act.”

On jobs, Dr. Ayyadurai took aim at the educational industrial complex, which he said is not producing students with tangible skills, as evident by the fact, for every 17 skilled job openings only one person is ready to take on those jobs. His main target was Harvard University, who he labeled a “Fake University that is actually a $45 billion dollar hedge fund.” He said, “We need to tax Harvard and use those proceeds to fund real skills-based education.”

He also proposed the elimination of the 4-year undergraduate degree for entrance into medical school. On the topic of student loans, he wants students to be permitted to default on their loans, pointing out that the banks had taken on a business risk, and part of doing business was to live with the consequences of taking on such risks. He criticized these banks for giving predatory loans to students without any background checks on either their ability to repay the loans or the value of their degrees.

“When any business asks a bank for a loan, the bank performs due diligence, making sure that the business will succeed. But when it comes to students, they don’t do any such thing to make sure if the student’s course of study will ever lead to a successful outcome,” he stated. He pointed out how a woman who had taken a $8,000 student loan was forced to repay more than $200,000 without any end in sight.

Concerning clean government, Dr. Ayyadurai proposed term limits stating that anyone who had served in any public office for two terms should be forbidden from any other public office. He also proposed, “One Dollar for one Vote,” as a simple solution for campaign finance reform. This means that the most a political candidate could raise and spend would equal the total number of registered voters multiplied by $1. Therefore in the Massachusetts U.S. Senate race, only $4.3 million dollars could be raised and spent.

When he ended his speech by announcing that he was going independent, the room once again erupted with chants of “Shiva! Shiva!” A consultant from American Bridge, a pro-Elizabeth Warren research group, who has been shadowing Dr. Shiva Ayyadurai for the past six months and was also in attendance, seemed to have forgotten why he had shown up for, and was seen nodding in agreement during Dr. Ayyadurai’s speech.