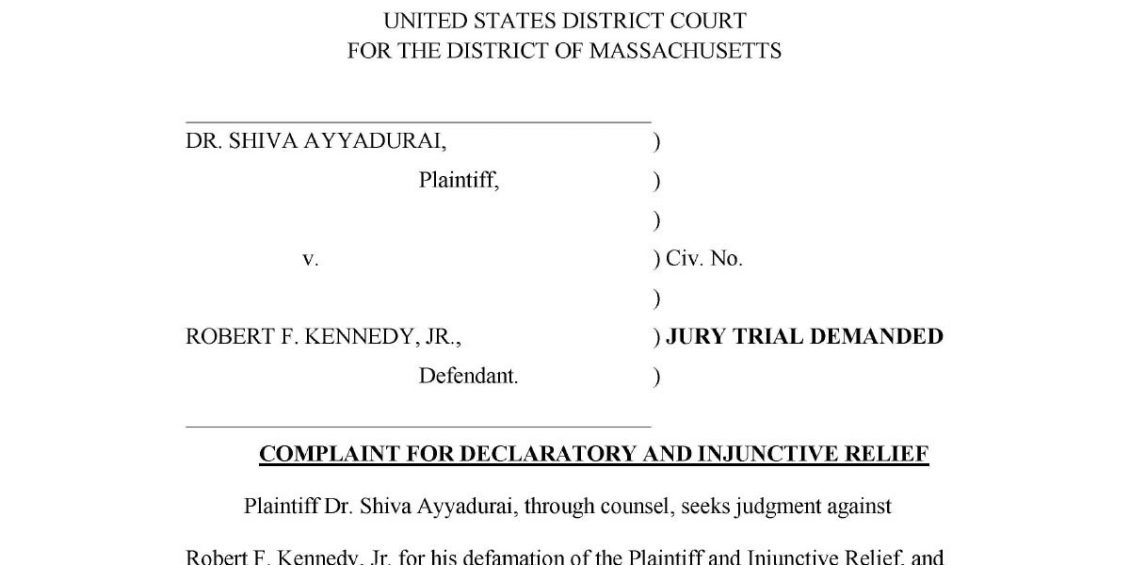 Cambridge, MA – Dr. Shiva Ayyadurai, MIT PhD, the inventor of email, scientist, innovator, and U.S. Senate Candidate (R-MA) has filed a $95 million lawsuit in Federal Court in Boston against Robert F. Kennedy, Jr. for eight instances of defamation. Mr. Kennedy is a pro-vaccine advocate and three-time endorser of Hillary Clinton. Mr. Kennedy’s nephew Joe Kennedy, who supports mandatory vaccinations, is a Democrat candidate in the U.S. Senate election in which Dr. Shiva Ayyadurai is running as a Republican.

Dr. Ayyadurai had earlier pointed out the hypocrisy of Mr. Kennedy, who purports to support medical freedom and the environment, but in point of fact had endorsed Hillary Clinton three times, despite knowing Hillary Clinton being a strong proponent of mandatory vaccinations, the largest recipient of contributions from Big Pharma in the 2016 election, and being pro-Monsanto. Moreover, Dr. Ayyadurai publicly shared Mr. Kennedy’s video in which Mr. Kennedy states that he is “fiercely pro-vaccine” and supports government “policies that encourage full vaccination for all Americans.”

In response to Dr. Ayyadurai exposing the facts, Mr. Kennedy countered with big lies, such as falsely asserting that Dr. Ayyadurai is a “Vaccine Maker,” and made “his fortune running email operations for President Bill and Hillary Clinton.”

Dr. Shiva Ayyadurai said, “This smear campaign by Robert F. Kennedy, Jr. was clearly aimed at damaging my election against his nephew Joe Kennedy, who like Hillary Clinton, believes in mandatory vaccinations.”

Before filing the lawsuit, Mr. Kennedy on two occasions was afforded the opportunity to retract his false statements. Dr. Ayyadurai estimates
that the damages exceed $95 million, and plans to use all of the proceeds from this lawsuit to create ten integrative health and wellness centers in economically-depressed neighborhoods across Massachusetts to educate residents on the importance of boosting the immune system to advance health and well-being. Dr. Ayyadurai’s attorneys have demanded a jury trial.

Dr. Ayyadurai holds 4 degrees from MIT, including his PhD from the MIT Department of Biological Engineering in Systems Biology. He is a world-renowned expert on the immune system, having recently delivered the distinguished Prestige Lecture at the National Science Foundation (NSF) center on the “Modern Science of the Immune System.”

The complaint can be found at this link: CLICK HERE

The case will be heard by Judge William G. Young.