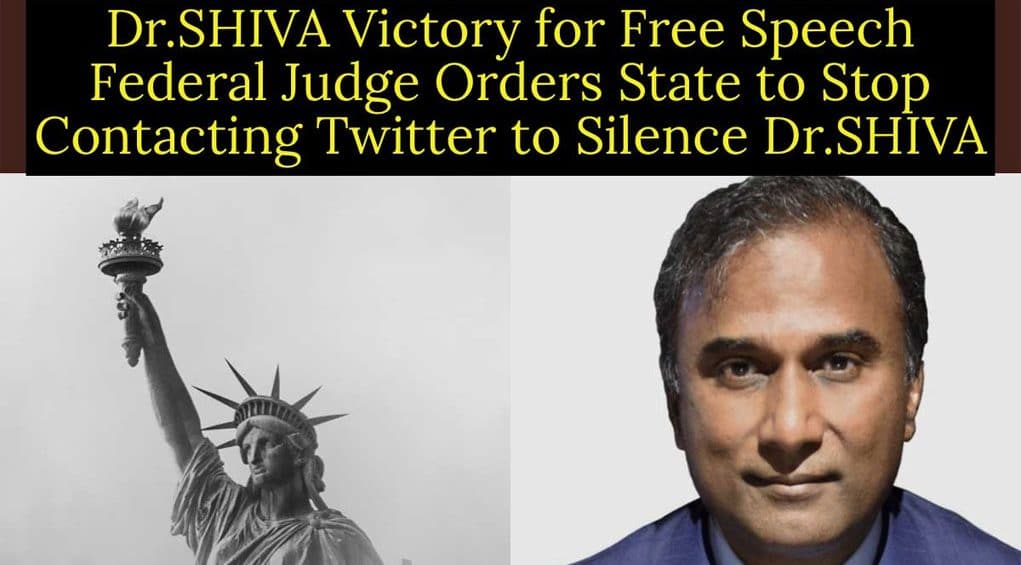 Dr. Shiva Ayyadurai, who represented himself in Federal court as his own counsel before Judge Mark L. Wolf, obtained a landmark victory today for free speech on Twitter.

Dr. Shiva stated, “My posts on Twitter were exposing the lack of election integrity in Massachusetts.  It is despicable that Secretary Galvin violated my First Amendment Rights in order to conceal this fact from the voting public, using the dog whistle of ‘election misinformation.’  Justice was served today. I will continue to fight for free speech rights of all Americans.”

By way of background, earlier in September of 2020, Dr. Shiva filed a Public Records Request with Massachusetts Secretary of State William Francis Galvin concerning the irregularities in the 2020 Massachusetts primary election, and requested ballot images. Secretary Galvin’s legal counsel Michelle Tassinari stated by email that Massachusetts had “not stored” i.e. destroyed the ballot images that were generated by ballot scanners.  Federal law requires all records generated in connection with a Federal election to be retained for 22 months. Secretary Galvin’s office stated that Massachusetts law prohibits “capturing of ballot images,” but did not cite the State law or regulation, even after repeated requests from Dr. Shiva; and, refused to address whether Massachusetts regulations could overrule Federal law where it concerned an election for Federal office (in this case, for U.S. Senate).

Dr. Shiva, who is currently running for U.S. Senate as a Write-In candidate, then posted screenshots of those emails from Ms. Tassinari on his Twitter feed.  Secretary Galvin admitted today in Federal court that his office did indeed complain to Twitter about Dr. Shiva’s tweets and that Secretary Galvin did coordinate with the National Association of State Election Directors (NASED) to also apply pressure on Twitter to mute Dr. Shiva’s political speech.  Secretary Galvin also revealed that the Massachusetts Elections Division and the elections divisions of all the other states work with the NASED as “Twitter partners” to have a high-priority relationship – a hotline – to suppress speech they arbitrarily define as  “election misinformation.”

Today’s clear victory in U.S. District Court of Massachusetts documents that Secretary Galvin censors political speech. During oral argument, Judge Mark L. Wolf told Secretary Galvin’s legal counsel that per the U.S. Constitution, the constitutional response to any tweet that they felt was false would be to issue a tweet themselves from the State’s Election Division’s own Twitter account. Secretary Galvin chose instead to pressure Twitter to delete a candidate’s tweets and mute his voice during his election campaign.